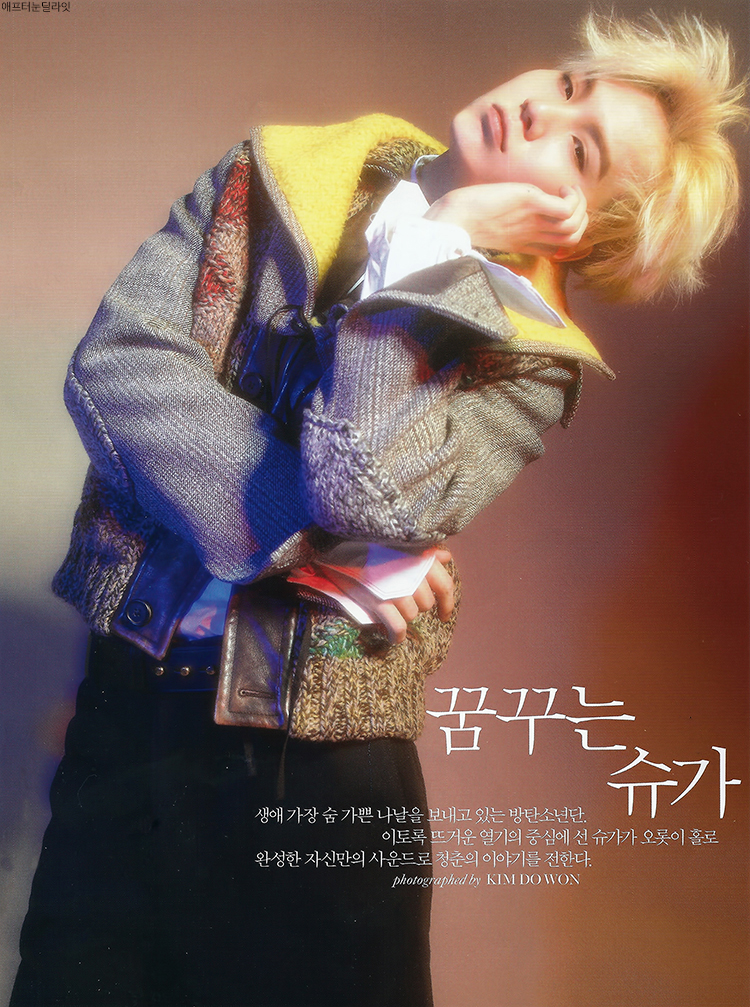 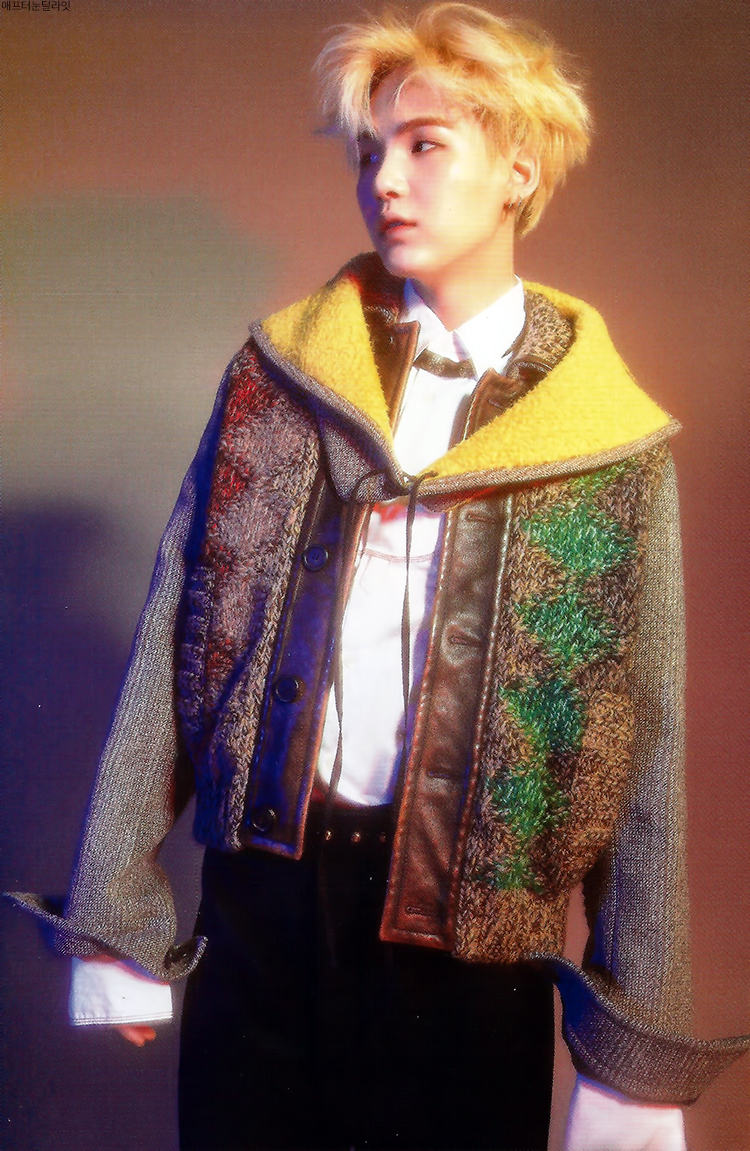 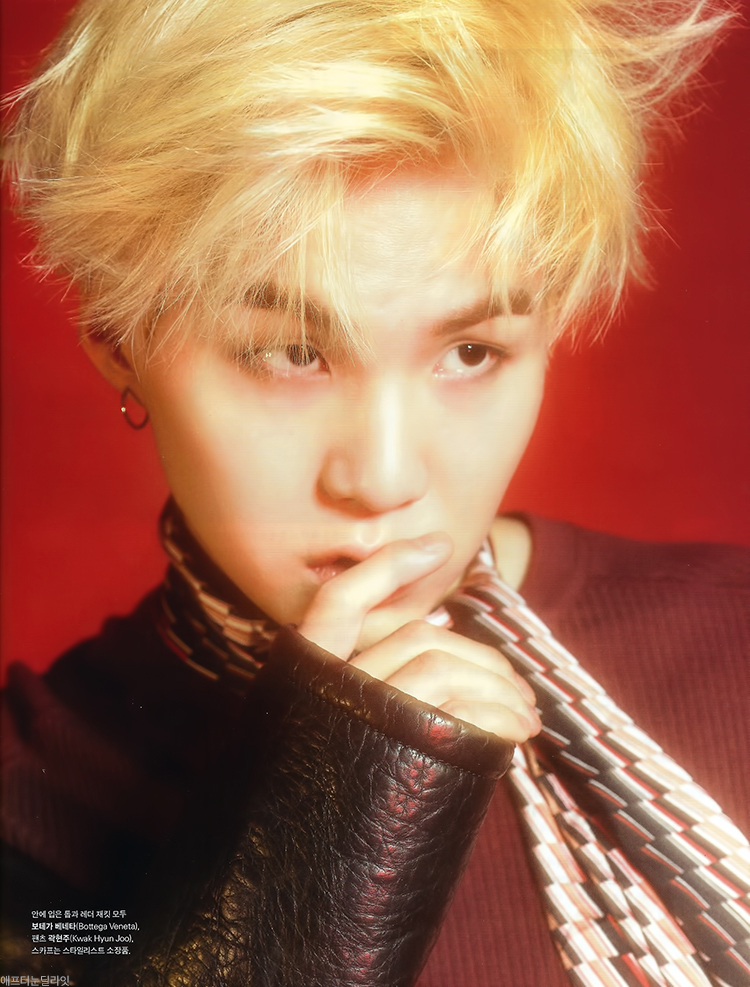 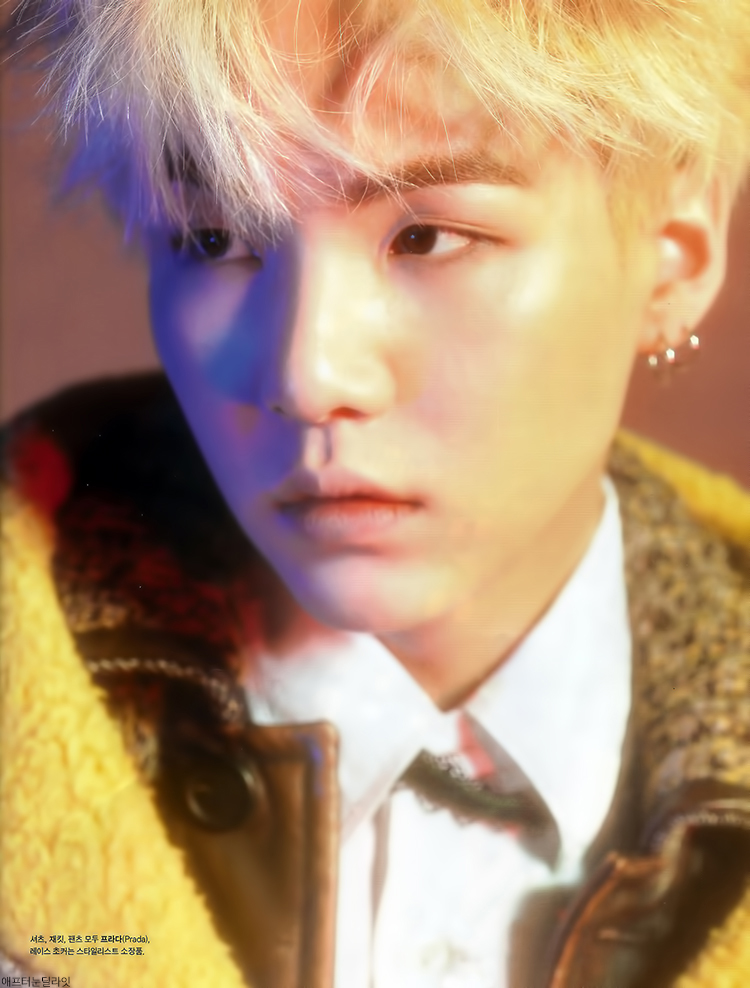 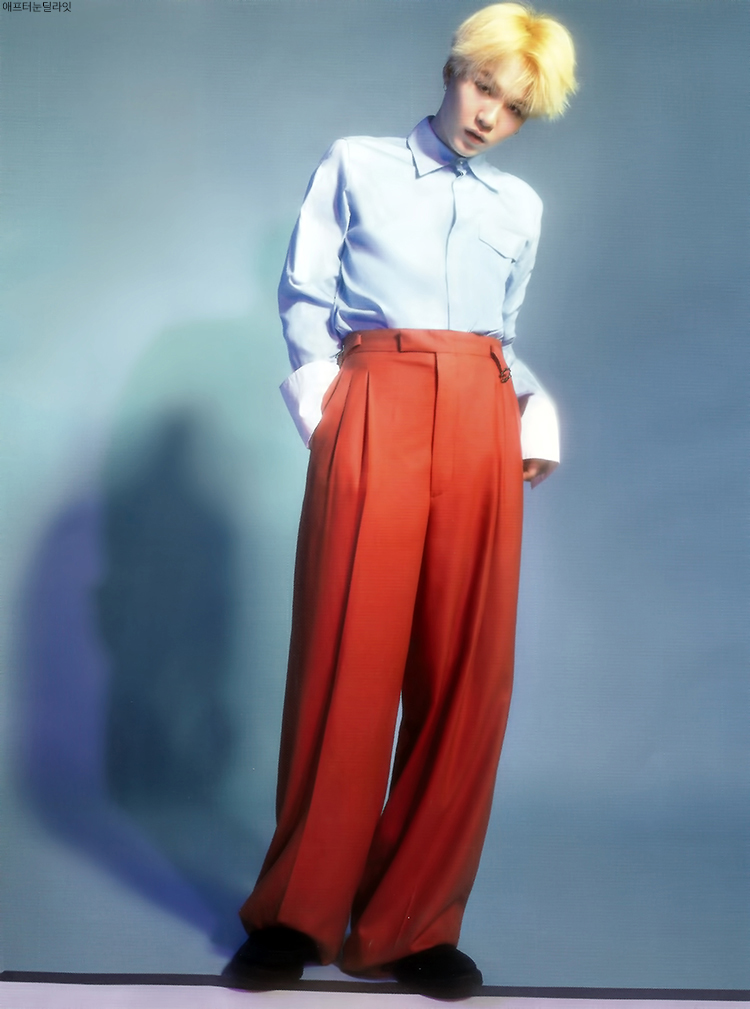 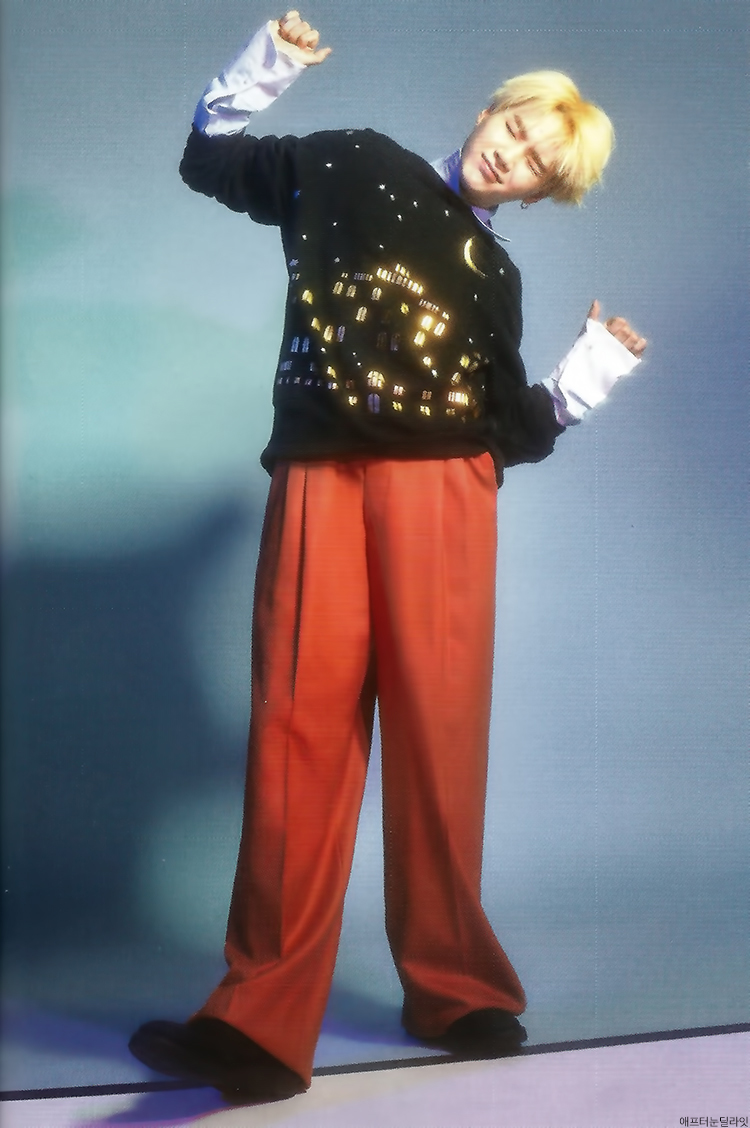 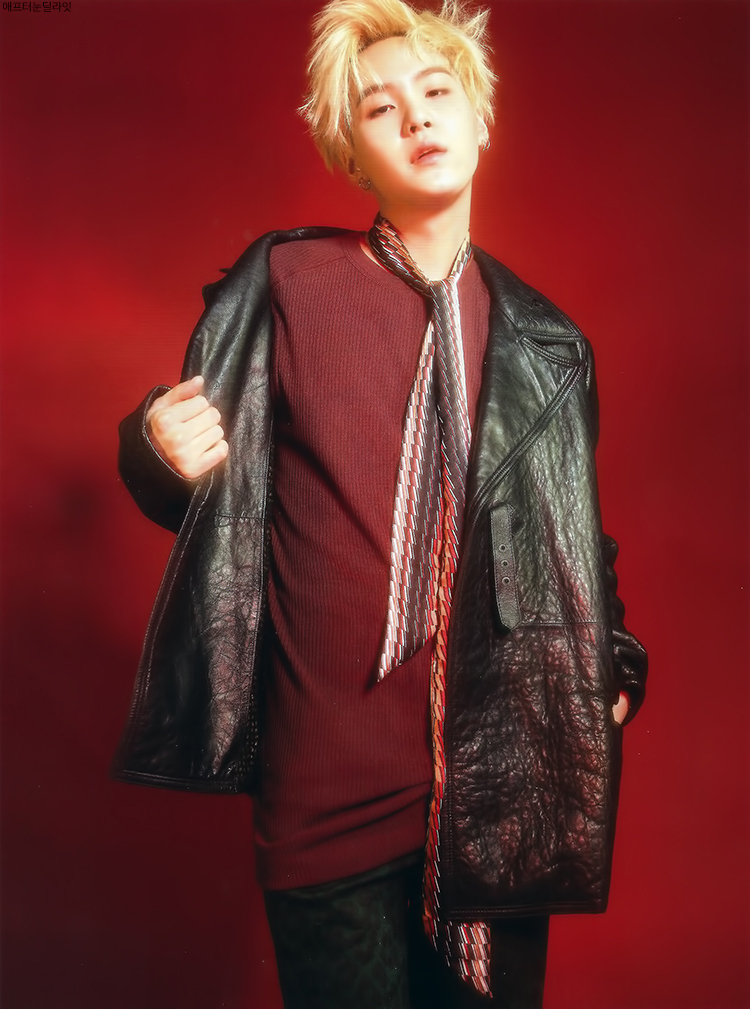 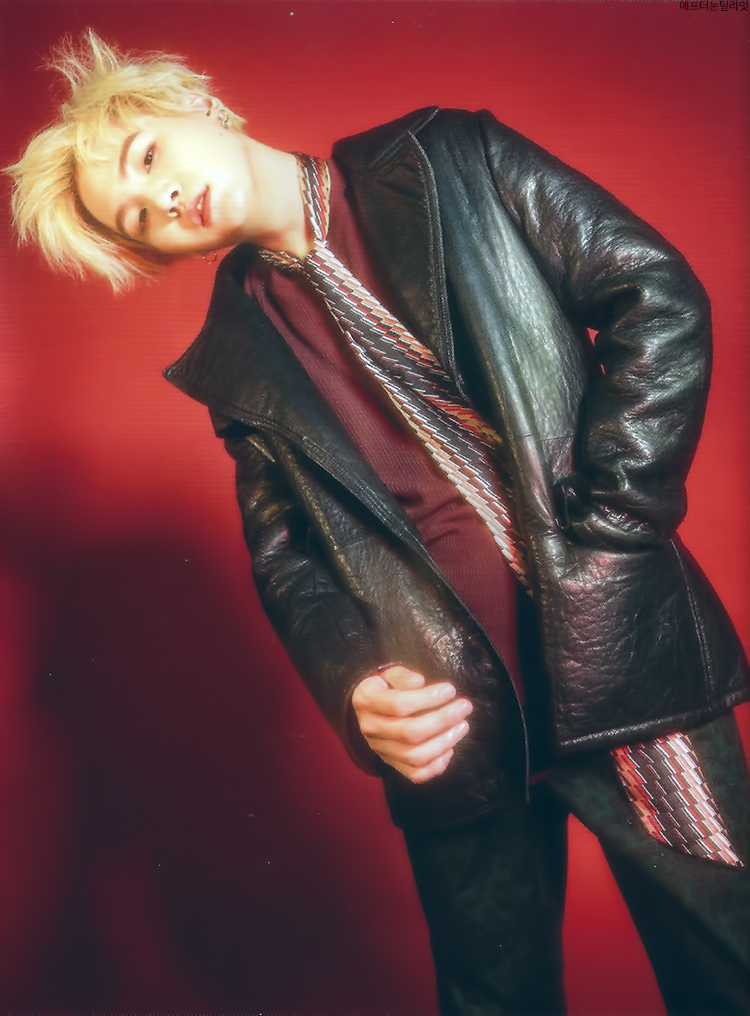 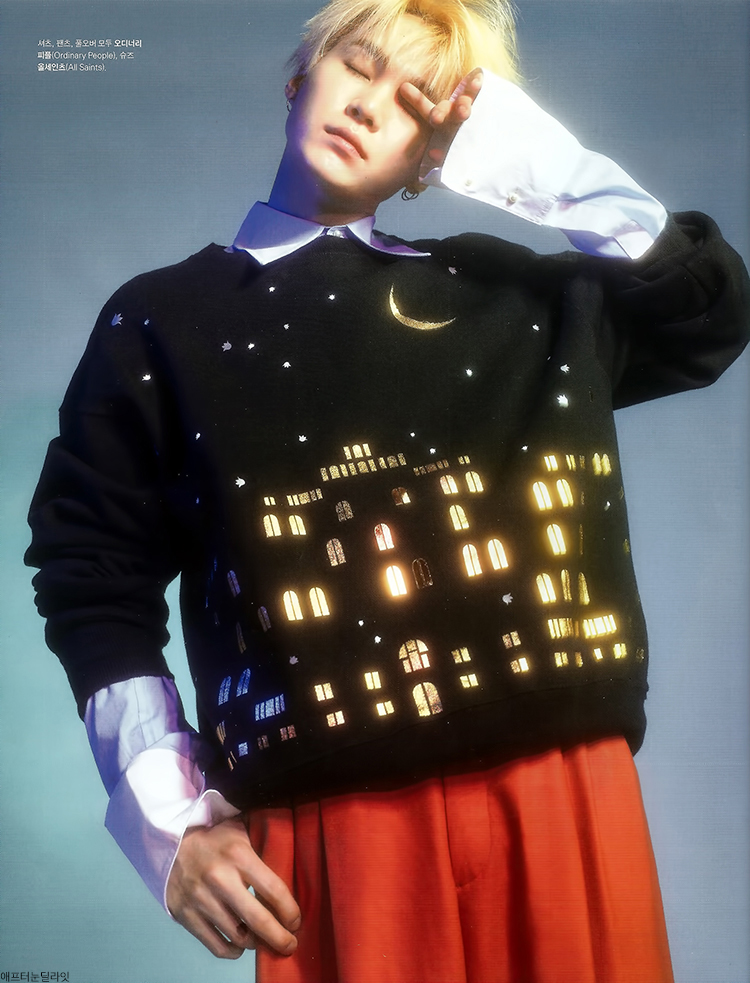 Q: I heard that BTS have successfully wrapped up the Asia tour, you guys have been going overseas throughout 2 years, you must be really busy.

A: I really enjoy it. Because I’m living the life that I dreamed of when I was young. The time difference between Brazil and Korea is 12 hours. We’re standing on the stage on the opposite side of the world, it’s wonderful and I’m thankful. It’s ok to sleep less.

Q: Even though you’re really busy, you’re releasing a mixtape.

A: I wrote songs on the plane when we’re going away and coming back, and after the concert, I’ll work in the hotel room. It’s nearly done now and after the interview, I’ll go and work on it.

Q: What kind of songs are you writing?

A: You can’t hear the style of these tracks in BTS’ music. Especially the feelings of the lyrics are very different. I expressed more straightforwardly about what I think of youth. The contents about myself are also honestly included in there. I like to include in subject matters such as the reality, goal, conflict, dream that I’ve been experiencing from the late teens until the 20s.

Q: It seems that you usually think deeply about these things.

A: Because it’s the time that I’m living in. As I listened to my friends who are at the same age and my older brother’s stories, what they’re most worried about is that they don’t have a clear dream. Because they’ve been living according to the social framework. When they became an adult and when they’re facing the reality, it’s completely different to what they’re thinking. They’d constantly think more about about getting a job or about entrance examination questions.

A: I’ll live a bit more to see if it’s going well, but I can guarantee that I’m working hard to live my life to the fullest.

Q: From writing the lyrics, songs to producing, the mixtape is done completely by yourself. You seem greedy and there are also many elements that you want include, right?

A: I’m getting greedier as I’ve been doing everything. It doesn’t matter what it is, I won’t allow myself to be half-hearted. I really focused on the perfection of the mixtape. Especially when I was making the track list, I thought about it a lot. I thought about how to make the flow, and how to make the stories that I want to convey clearer. The mixtape is made meticulously like an actual album.

Q: You chose to make a mixtape instead of an album.

A: The answer is simple. The purpose of it is to try everything that I want to do, that’s how I started. While trying to express myself transparently, I wanted to make music in the way that I’m thinking and following my own heart. The lyrics are also written freely.

A: Yes. That’s why I’m releasing the mixtape as ‘Agust D’ and not my name ‘Suga’.

Q: Before you started to promote under BTS, you’ve been making music for a long time. You’ve had the experience of releasing a mixtape before debut right?

A: What I’ve released back then is the quality that I can’t let people hear it (laughs). My thoughts have changed a lot while promoting under BTS for 3 years. Actually, I was very daunted to debut as an idol. I thought ‘I was someone who just constantly made music, but if I debut as an idol, the others will look at me differently, right?’ But I realized that all of it was vain thoughts. Things will change depending how you do it, it seems that I was in serious agony and attached a burdensome meaning to it. I was always in the mode of strictness, seriousness and earnestness (laughs). The framework that locked myself up at the time, it feels like a fence now. My mind is at ease now. I also took out a bit of my stubbornness towards music. How should I put it? I feel like my vision is a lot broader than before.

A: Yes. It is. My confidence has become a lot more solid. It’s the same with everyone in BTS. You’ll know when you put all the thoughts that 7 members have been thinking, and we’re more confident in performing. The musicality, choreography, performance and stage set, each element is important but I think it’s possible to produce a plausible result when you mix everything together properly in one place. We must do our best as much as on the stage. Our fans who comes to see our performance, I want to show them more than what they’ve been anticipating.

Q: As much as you’re greedy about the performance, it seems that the members share stories about music.

A: We work individually, we organize what we’ve made and discuss about it when we’re together. It’d stressful if we keep talking about work all the time.

Q: Where do you usually get your inspirations from when you work?

A: I’m constantly writing memos down. The things that I have in mind every moment, the emotions that suddenly hits me, the words that suddenly comes up in my head, I write everything down. I’d be blankly sitting there and browse through the things that I noted down 2 – 3 years ago, good ideas would come to me. I also listen to other musician’s music.

Q: Recently, who do you mainly listen to?

Q: You listen to many music, as much as liking to concentrate on your thoughts and feelings, having alone time must be important.

A: Yes, that’s right. I definitely need time for myself. There’s a time when I was sitting in the studio alone for 10 hours. Actually, I’ll be goofing around for 8 hours and work about 1 hours (laughs). It’s important to have the time to organize my thoughts calmly in an empty room. Without those time, I’ll run off (to somewhere) and feel overburdened.

Q: What’s your favorite line that you wrote while sitting there alone?

A: A part from the song ‘Tomorrow’ – because the dawn right before, the sun rises is the darkest. Even in the far future, never forget the you of right now. I like the feeling of these lyrics. The lyrics about comforting and growing up. I want to make the music that people can easily sympathize with.

Q: After talking with you, everything seems to be about music.

A: We can talk about other things that I’m interested in. Um, about collecting music equipment? About buying rings or necklaces/chains and bracelets? There’s nothing special (laughs).

Q: As I look at BTS’ SNS, the atmosphere is usually pleasant. It seems that Suga is a bit quiet.

A: I have a bright personality but I don’t really like the nosiness. Our Kakaotalk group chat is a mess. We’re really hilarious. We take bizarre photos of ourselves and uploads them, we take ugly photos (of each other) without permission and shares them. Yesterday, the video of Yang Sehyeong was shared and everyone burst out laughing. There were a lot of ‘ㅋㅋㅋ’. We’re tired as we’re working individually and have our own schedules but we laugh like this, we chat and support each other.

Q: BTS is a group that have been through a lot together and also released a mixtape with the music that you want to do. As much as you’ve suffered, it seems that you’re living your 20s fruitfully.

A: There’s a long way to go to achieve the things that I want to achieve. I want to do better. I’ll continue to make music for a long time. I’ll be glued to the floor. Like being young, youthful in my 20s, I’ll live diligently when I’m in my 30s, 40s.