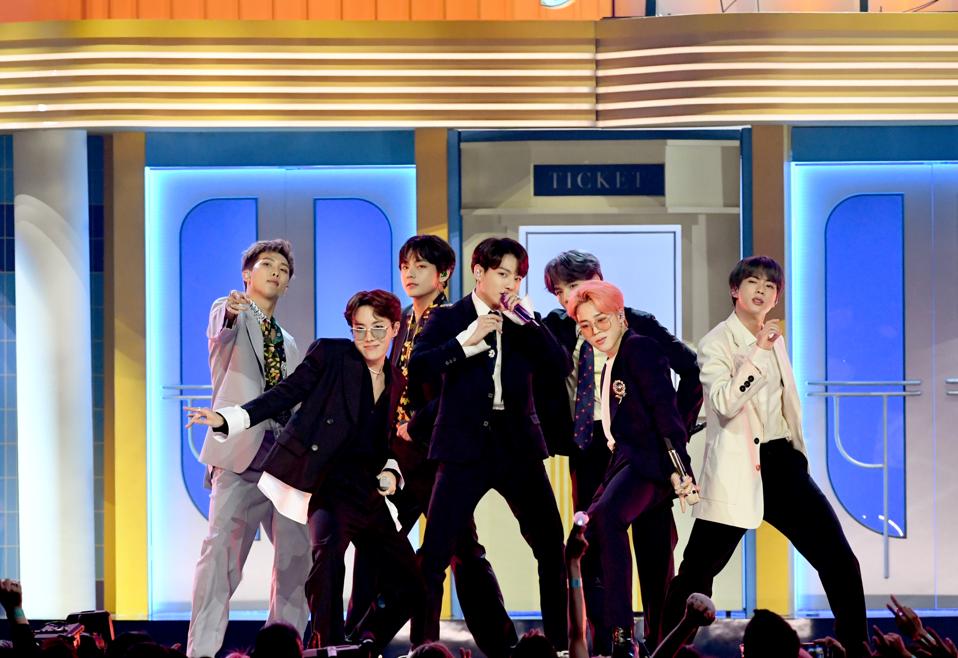 It was a foregone conclusion that BTS would earn their fourth consecutive No. 1 debut on the Billboard 200 this week with their highly anticipated new album, Map of the Soul: 7. But not even the most optimistic analysts pegged it to fly this high. The Korean pop superstars moved 422,000 album-equivalent units, nearly double their previous best sales week (230k with 2019’s Map of the Soul: Persona) and roughly 150,000 units above early projections. The biggest band in the world somehow got even bigger, and they don’t seem to be approaching the ceiling of their popularity anytime soon.

Map of the Soul: 7’s stratospheric debut isn’t just a victory for BTS. It’s a smashing of the accepted pop music hierarchy and a changing of the guard. The 400,000-plus debut is even more striking on the heels of Justin Bieber’s Changes, which topped the Billboard 200 last week with a relatively anemic 231,000 units. Bieber’s not the only one who got bested, either. In fact, here’s a non-exhaustive list of recent releases by A-list artists that had smaller debuts than Map of the Soul: 7:

Not only did Map of the Soul: 7 handily earn the biggest debut of 2020, but it came fairly close to the first-week totals of Post Malone’s Hollywood’s Bleeding (489k) and Harry Styles’ Fine Line (478k), the second- and third-biggest bows of 2019, respectively. BTS also reached that sum without the help of ticket or merchandise bundles, which have become commonplace among superstar artists lately. Combine their supersized debut with their string of sold-out stadium shows for this summer, and it’s clear they didn’t need the boost in either department.

With Map of the Soul: 7, BTS have cemented their status as one of the most popular artists in the world, no qualifications necessary. Given the first-week tallies of their last three No. 1 albums—Love Yourself Tear’s 135k, Love Yourself: Answer’s 185k, Map of the Soul: Persona’s 230k—one could have argued their chart dominance was a matter of good timing, a high point in an otherwise slow release week. To do so now would be an act of willful ignorance. BTS are not “a big K-pop group”; they’re a huge group, point-blank, a global phenomenon the likes of which the world hasn’t seen in decades. Their success is not a fluke, because flukes don’t last for four albums straight. BTS have outsold some of the biggest, most reliable names in pop music because they have become one of the biggest, most reliable names in pop music themselves. Their years-long upward trajectory has reached unprecedented heights; all the world can do now is watch—and listen.