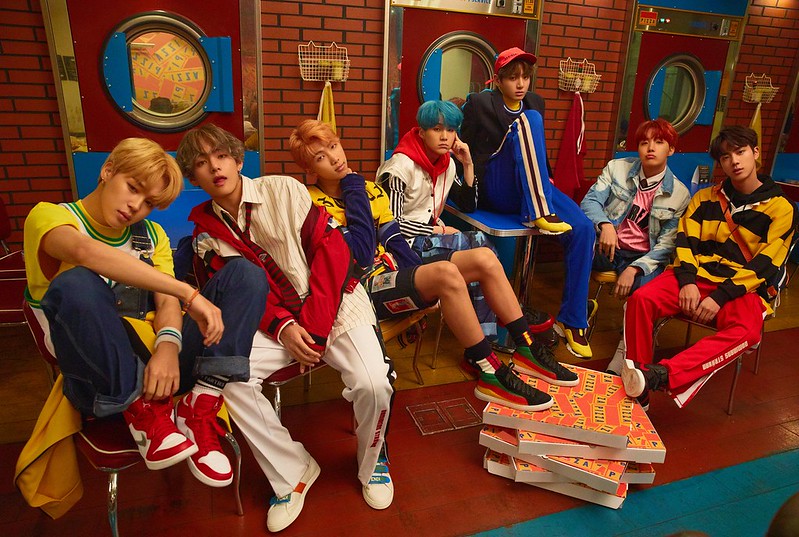 6. For the first time, they got nominee at SBS Inkigayo with S.M The Ballad and Soyou feat Junggigo. But in the end, they got 3rd place with total 4959 votes.

7. BTS’ meaning name is ‘To stop the suppression and prejudice and to defend our music and generation.’

8. BTS had a rule in their dorm. If the member broke a rule, they had to pay 1,000 wons. But actually, they kept on breaking them and the amount of money they had to pay was too much. So Rap Monster abolished it with his leader privilege. And V said the money they collected it’s still on the refrigerator. But Jin said he was managing the money and right now,  they only have 1,300 won left. The money was used mostly for the chicken an pizza I bought for the birthday party~!

10. DMC Darryl was commented about BTS Track Cypher Pt2: Triptych on DM Twitter with a foreigner fans . He said, “Tell them keep on writing and reciting!!!! Good work!!! Nice!!! They sound very confident and precise! Love it!”

13. Their company is Big Hit and Bang Shihyuk is their PD.

14. Their fans called A.R.M.Y that it means Adorable Representative M.C for Youth

15. As their name, BTS logo is Bulletproof Scout Boys.

18. Location shooting for No More Dream MV is at Namyangju.

19. Japan Actor Yamada Yuki (he interview BTS at Potato Magazine) is very interested about BTS and Support them. He also wrote about BTS in his Blog.

21. Q : With ‘Boy in Luv,’ you were nominated for number one at the music broadcasts, which was the best record since debut. Did you have a company dinner as you wished? (IZE MAGAZINE)

– Rap Monster, “In that time, we had several, but before promoting this album, Bang Shi Hyuk PD took us to Garosu-gil. He felt confident about this contents, and as long as we didn’t make any big mistakes, we would get good responses. It was like he had a foresight. That day, we ate a lot of meat, and in order to eat dessert, we went to a coffee shop that men would absolutely not go together to.”

– Jin, “Nonetheless, we had a few slices of cake, and we weren’t calmly having conversation while eating. We ate everything up in an instant and ordered again.”

22. Jimin said that the members compete over the number of retweets their tweets/photos get.

23.  BTS had their version of ‘Harlem Shake’ dance video.

24. Song Jieun ‘Secret’ mentioned she wanna do duet with BTS. But she can’t choose whose the member is.

25. About Jin sees his members. [Arirang After School Club After Show 140827]
– Jin, “They play around like that at home.When Suga and i are lying down and trying to rest,we’re always talking about how we can make them quite down.”

26. Jimin about BTS.
– Jimin, “We’re all loud. No one of us are quite. Usually you have that one memberwho’s really serious and quite,but we’re just all loud. I think they’re kind of weird. Even though thyey’re my team.”

Notes ; All The Fact from Interview Magazine,TV,Radio,etc From 1st Debut and The Fact Might Be Change in the future because the Maturity of BTS Member